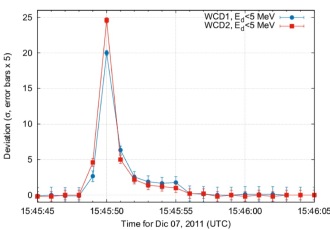 The Latin American Giant Observatory (LAGO) is an extended cosmic ray observatory composed of a network of water-Cherenkov detectors (WCD) spanning over different sites located at significantly different altitudes (from sea level up to more than $5000$\,m a.s.l.) and latitudes across Latin America, covering a wide range of geomagnetic rigidity cut-offs and atmospheric absorption/reaction levels. The LAGO WCD is simple and robust, and incorporates several integrated devices to allow time synchronization, autonomous operation, on board data analysis, as well as remote control and automated data transfer.
This detection network is designed to make detailed measurements of the temporal evolution of the radiation flux coming from outer space at ground level. LAGO is mainly oriented to perform basic research in three areas: high energy phenomena, space weather and atmospheric radiation at ground level. It is an observatory designed, built and operated by the LAGO Collaboration, a non-centralized collaborative union of more than 30 institutions from ten countries.
In this paper we describe the scientific and academic goals of the LAGO project – illustrating its present status with some recent results – and outline its future perspectives.