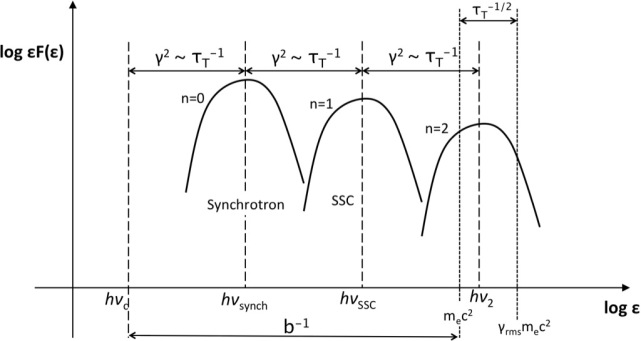 Many relativistic plasma environments in high-energy astrophysics, including pulsar wind nebulae, hot accretion flows onto black holes, relativistic jets in active galactic nuclei and gamma-ray bursts, and giant radio lobes, are naturally turbulent. The plasma in these environments is often so hot that synchrotron and inverse-Compton (IC) radiative cooling becomes important. In this paper we investigate the general thermodynamic and radiative properties (and hence the observational appearance) of an optically thin relativistically hot plasma stirred by driven magnetohydrodynamic (MHD) turbulence and cooled by radiation. We find that if the system reaches a statistical equilibrium where turbulent heating is balanced by radiative cooling, the effective electron temperature tends to attain a universal value $\theta = kT_e/m_e c^2 \sim 1/\sqrt{\tau_T}$, where $\tau_T=n_e\sigma_T L \ll 1$ is the system’s Thomson optical depth, essentially independent of the strength of turbulent driving or magnetic field. This is because both MHD turbulent dissipation and synchrotron cooling are proportional to the magnetic energy density. We also find that synchrotron self-Compton (SSC) cooling and perhaps a few higher-order IC components are automatically comparable to synchrotron in this regime. The overall broadband radiation spectrum then consists of several distinct components (synchrotron, SSC, etc.), well separated in photon energy (by a factor $\sim \tau_T^{-1}$) and roughly equal in power. The number of IC peaks is checked by Klein-Nishina effects and depends logarithmically on $\tau_T$ and the magnetic field. We also examine the limitations due to synchrotron self-absorption, explore applications to Crab PWN and blazar jets, and discuss links to radiative magnetic reconnection. 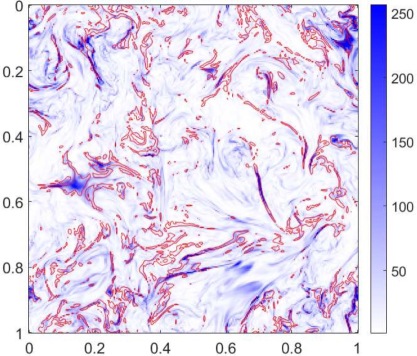 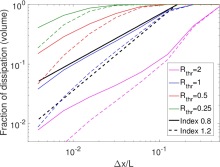 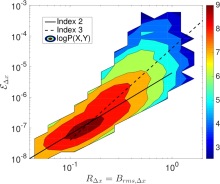 In magnetohydrodynamic (MHD) turbulence, the large-scale magnetic field sets a preferred local direction for the small-scale dynamics, altering the statistics of turbulence from the isotropic case. This happens even in the absence of a total magnetic flux, since MHD turbulence forms randomly oriented large-scale domains of strong magnetic field. It is therefore customary to study small-scale magnetic plasma turbulence by assuming a strong background magnetic field relative to the turbulent fluctuations. This is done, for example, in reduced models of plasmas, such as reduced MHD, reduced-dimension kinetic models, gyrokinetics, etc., which make theoretical calculations easier and numerical computations cheaper. Recently, however, it has become clear that the turbulent energy dissipation is concentrated in the regions of strong magnetic field variations. A significant fraction of the energy dissipation may be localized in very small volumes corresponding to the boundaries between strongly magnetized domains. In these regions the reduced models are not applicable. This has important implications for studies of particle heating and acceleration in magnetic plasma turbulence. The goal of this work is to systematically investigate the relationship between local magnetic field variations and magnetic energy dissipation, and to understand its implications for modeling energy dissipation in realistic turbulent plasmas.

Comments: 6 pages, 5 figures, to appear in Monthly Notices of the Royal Astronomical Society 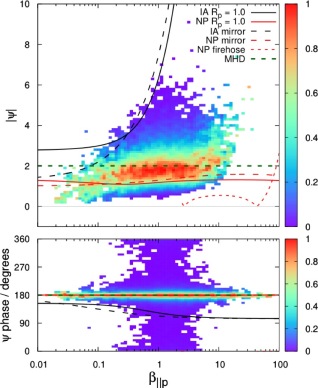 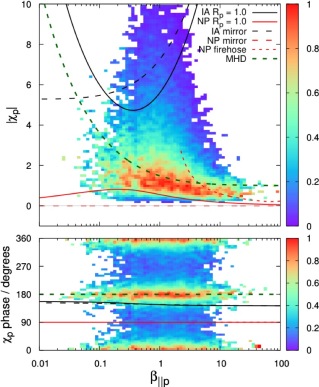 Observations in the solar wind suggest that the compressive component of inertial-range solar-wind turbulence is dominated by slow modes. The low collisionality of the solar wind allows for non-thermal features to survive, which suggests the requirement of a kinetic plasma description. The least-damped kinetic slow mode is associated with the ion-acoustic (IA) wave and a non-propagating (NP) mode. We derive analytical expressions for the IA-wave dispersion relation in an anisotropic plasma in the framework of gyrokinetics and then compare them to fully-kinetic numerical calculations, results from two-fluid theory, and MHD. This comparison shows major discrepancies in the predicted wave phase speeds from MHD and kinetic theory at moderate to high $\beta$. MHD and kinetic theory also dictate that all plasma normal modes exhibit a unique signature in terms of their polarization. We quantify the relative amplitude of fluctuations in the three lowest particle velocity moments associated with IA and NP modes in the gyrokinetic limit and compare these predictions with MHD results and in-situ observations of the solar-wind turbulence. The agreement between the observations of the wave polarization and our MHD predictions is better than the kinetic predictions, suggesting that the plasma behaves more like a fluid in the solar wind than expected. 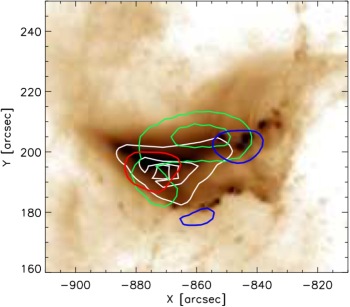 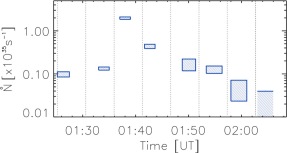 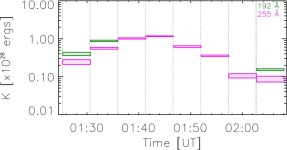 The energy released in solar flares derives from a reconfiguration of magnetic fields to a lower energy state, and is manifested in several forms, including bulk kinetic energy of the coronal mass ejection, acceleration of electrons and ions, and enhanced thermal energy that is ultimately radiated away across the electromagnetic spectrum from optical to X-rays. Using an unprecedented set of coordinated observations, from a suite of instruments, we here report on a hitherto largely overlooked energy component — the kinetic energy associated with small-scale turbulent mass motions. We show that the spatial location of, and timing of the peak in, turbulent kinetic energy together provide persuasive evidence that turbulent energy may play a key role in the transfer of energy in solar flares. Although the kinetic energy of turbulent motions accounts, at any given time, for only $\sim (0.5-1)$\% of the energy released, its relatively rapid ($\sim$$1-10$~s) energization and dissipation causes the associated throughput of energy (i.e., power) to rival that of major components of the released energy in solar flares, and thus presumably in other astrophysical acceleration sites.

Comments: 5pages, 4 figures, to be published in Physical Review Letters 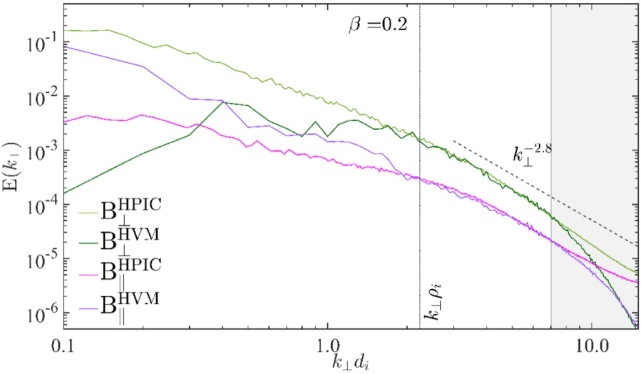 Kinetic-range turbulence in magnetized plasmas and, in particular, in the context of solar-wind turbulence has been extensively investigated over the past decades via numerical simulations. Among others, one of the widely adopted reduced plasma model is the so-called hybrid-kinetic model, where the ions are fully kinetic and the electrons are treated as a neutralizing (inertial or massless) fluid. Within the same model, different numerical methods and/or approaches to turbulence development have been employed. In the present work, we present a comparison between two-dimensional hybrid-kinetic simulations of plasma turbulence obtained with two complementary approaches spanning about two decades in wavenumber – from MHD inertial range to scales well below the ion gyroradius – with a state-of-the-art accuracy. One approach employs hybrid particle-in-cell (HPIC) simulations of freely-decaying Alfv\’enic turbulence, whereas the other consists of Eulerian hybrid Vlasov-Maxwell (HVM) simulations of turbulence continuously driven with partially-compressible large-scale fluctuations. Despite the completely different initialization and injection/drive at large scales, the same properties of turbulent fluctuations at $k_\perp\rho_i\gtrsim1$ are observed. The system indeed self-consistently “reprocesses” the turbulent fluctuations while they are cascading towards smaller and smaller scales, in a way which actually depends on the plasma beta parameter. Small-scale turbulence has been found to be mainly populated by kinetic Alfv\’en wave (KAW) fluctuations for $\beta\geq1$, whereas KAW fluctuations are only sub-dominant for low-$\beta$. 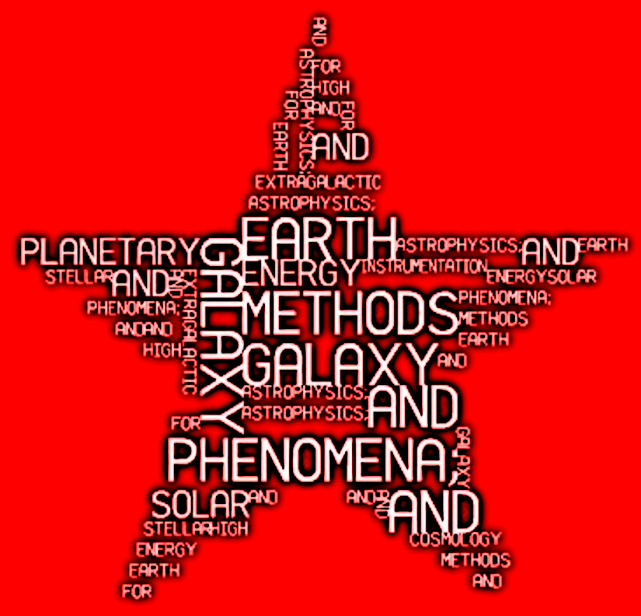 On the morning of the August 11th 1999, a total eclipse of the sun plunged Cornwall and parts of Devon into darkness. The event of the eclipse was bound to attract a great deal of scientific and media attention. Realizing that the differences in day-time/night-time propagation of VLF/LF/MF to HF bands would also apply during the darkness of the eclipse, the eclipse offered a rare PR opportunity to promote radio to the general public. At the same time the specific nature of the disturbance to the upper atmosphere and the effect on radio propagation could be examined in detail using scientific instruments at minimum cost since most instruments would not have to be moved. This would allow prediction models to be tested in a controlled fashion. Contained within this report are the details and results of the radio and ionospheric experiments conducted by the Rutherford Appleton Laboratory during the 1999 total solar eclipse. The promoting of the radio experiments with the general public produced nearly 60 appearances on local and national TV, newspapers and periodicals. Close to 1700 people responded to the general public medium wave experiment and 16 million people looked in on the general eclipse web site (part funded by RA) that included the details of the radio experiments. A large database of systematic observations across VLF to HF was collected from radio amateurs and from the RA Regional Offices allowing comparisons to be made with ITU estimates. There is a brief look at the scientific results and a forward look as to how the analysis of this disturbance might have impact on the use of ionospheric models for Space Weather tools in the future. 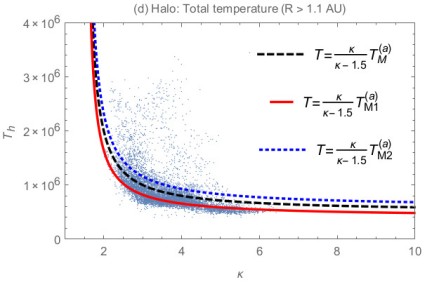 Context. Recent studies on Kappa distribution functions invoked in space plasma applications have emphasized two alternative approaches which may assume the temperature parameter either dependent or independent of the power-index $\kappa$. Each of them can obtain justification in different scenarios involving Kappa-distributed plasmas, but direct evidences supporting any of these two alternatives with measurements from laboratory or natural plasmas are not available yet. Aims. This paper aims to provide more facts on this intriguing issue from direct fitting measurements of suprathermal electron populations present in the solar wind, as well as from their destabilizing effects predicted by these two alternating approaches. Methods. Two fitting models are contrasted, namely, the global Kappa and the dual Maxwellian-Kappa models, which are currently invoked in theory and observations. The destabilizing effects of suprathermal electrons are characterized on the basis of a kinetic approach which accounts for the microscopic details of the velocity distribution. Results. In order to be relevant, the model is chosen to accurately reproduce the observed distributions and this is achieved by a dual Maxwellian-Kappa distribution function. A statistical survey indicates a $\kappa$-dependent temperature of the suprathermal (halo) electrons for any heliocentric distance. Only for this approach the instabilities driven by the temperature anisotropy are found to be systematically stimulated by the abundance of suprathermal populations, i.e., lowering the values of $\kappa$-index.