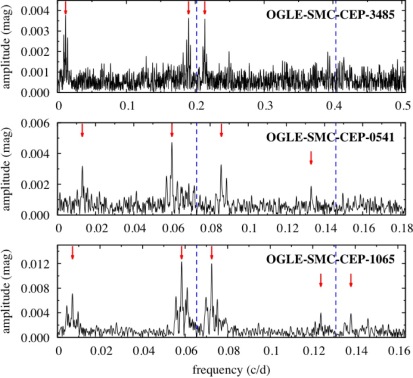 We report the discovery of periodic modulation of pulsation in 51 fundamental mode classical Cepheids of the Magellanic Clouds observed by the Optical Gravitational Lensing Experiment. Although the overall incidence rate is very low, about 1 per cent in each of the Magellanic Clouds, in the case of the SMC and pulsation periods between 12 and 16d the incidence rate is nearly 40 per cent. On the other hand, in the LMC the highest incidence rate is 5 per cent for pulsation periods between 8 and 14d, and the overall amplitude of the effect is smaller. It indicates that the phenomenon is metallicity dependent. Typical modulation periods are between 70 and 300d. In nearly all stars the mean brightness is modulated, which, in principle, may influence the use of classical Cepheids for distance determination. Fortunately, the modulation of mean brightness does not exceed 0.01 mag in all but one star. Also, the effect averages out in typical observations spanning a long time base. Consequently, the effect of modulation on the determination of the distance moduli is negligible. The relative modulation amplitude of the fundamental mode is also low and, with one exception, it does not exceed 6 per cent. The origin of the modulation is unknown. We draw a hypothesis that the modulation is caused by the 2:1 resonance between the fundamental mode and the second overtone that shapes the famous Hertzsprung bump progression. 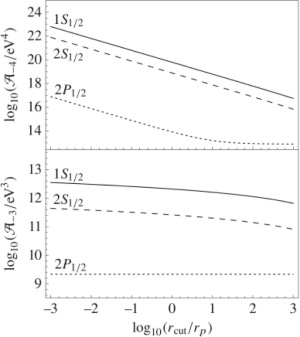 In a large class of scalar-tensor theories that are potential candidates for dark energy, a non-minimal coupling between the scalar and the photon is possible. The presence of such an interaction grants us the exciting prospect of directly observing dark sector phenomenology in the electromagnetic spectrum. This paper investigates the behavior of one-electron atoms in this class of modified gravity models, exploring their viability as probes of deviations from general relativity in both laboratory and astrophysical settings. Building heavily on earlier studies, our main contribution is threefold: a thorough analysis finds additional fine structure corrections previously unaccounted for, which now predict a contribution to the Lamb shift larger by nearly four orders of magnitude. Secondly, we include the effects of the nuclear magnetic moment, allowing for the study of hyperfine structure and the 21 cm line, which hitherto have been unexplored in this context. Finally, we also examine how a background scalar leads to equivalence principle violations.

In this work we study the imprints of a primordial cosmic string on inflationary power spectrum. Cosmic string induces two distinct contributions on curvature perturbations power spectrum. The first type of correction respects the translation invariance while violating isotropy. This generates quadrupolar statistical anisotropy in CMB maps which is constrained by the Planck data. The second contribution breaks both homogeneity and isotropy, generating a dipolar power asymmetry in variance of temperature fluctuations with its amplitude falling on small scales. We show that the strongest constraint on the tension of string is obtained from the quadrupolar anisotropy and argue that the mass scale of underlying theory responsible for the formation of string can not be much higher than the GUT scale. The predictions of string for the diagonal and off-diagonal components of CMB angular power spectrum are presented. 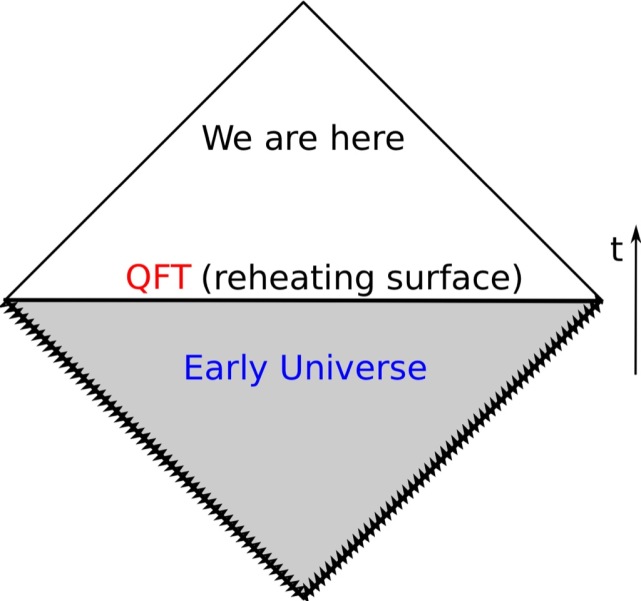 Holographic cosmology offers a novel framework for describing the very early Universe in which cosmological predictions are expressed in terms of the observables of a three dimensional quantum field theory (QFT). This framework includes conventional slow-roll inflation, which is described in terms of a strongly coupled QFT, but it also allows for qualitatively new models for the very early Universe, where the dual QFT may be weakly coupled. The new models describe a universe which is non-geometric at early times. While standard slow-roll inflation leads to a (near-)power-law primordial power spectrum, perturbative superrenormalizable QFT’s yield a new holographic spectral shape. Here, we compare the two predictions against cosmological observations. We use CosmoMC to determine the best fit parameters, and MultiNest for Bayesian Evidence, comparing the likelihoods. We find that the dual QFT should be non-perturbative at the very low multipoles ($l \lesssim 30$), while for higher multipoles ($l \gtrsim 30$) the new holographic model, based on perturbative QFT, fits the data just as well as the standard power-law spectrum assumed in $\Lambda$CDM cosmology. This finding opens the door to applications of non-perturbative QFT techniques, such as lattice simulations, to observational cosmology on gigaparsec scales and beyond.

We extend existing methods for using cross-correlations to derive redshift distributions for photometric galaxies, without using photometric redshifts. The model presented in this paper simultaneously yields highly accurate and unbiased redshift distributions and, for the first time, redshift-dependent luminosity functions, using only clustering information and the apparent magnitudes of the galaxies as input. In contrast to many existing techniques for recovering unbiased redshift distributions, the output of our method is not degenerate with the galaxy bias b(z), which is achieved by modelling the shape of the luminosity bias. We successfully apply our method to a mock galaxy survey and discuss the potential application of our model to real data.

Weakly-coupled TeV-scale particles may mediate the interactions between normal matter and dark matter. If so, the LHC would produce dark matter through these mediators, leading to the familiar ‘mono-X’ search signatures, but the mediators would also produce signals without missing momentum via the same vertices involved in their production. This document from the LHC Dark Matter Working Group suggests how to compare searches for these two types of signals in case of vector and axial-vector mediators, based on a workshop that took place on September 19/20, 2016 and subsequent discussions. These suggestions include how to extend the spin-1 mediated simplified models already in widespread use to include lepton couplings. This document also provides analytic calculations of the relic density in the simplified models and reports an issue that arose when ATLAS and CMS first began to use preliminary numerical calculations of the dark matter relic density in these models.

We argue that massive quantum fields source low-frequency long-wavelength metric fluctuations through the quantum fluctuations of their stress-energy, given reasonable assumptions about the analytic structure of its correlators. This can be traced back to the non-local nature of the gauge symmetry in General Relativity, which prevents an efficient screening of UV scales (what we call the cosmological non-constant problem). We define a covariant and gauge-invariant observable which probes line-of-sight spacetime curvature fluctuations on an observer’s past lightcone, and show that current pulsar timing data constrains any massive particle to $m\lesssim 600$ GeV. This astrophysical bound severely limits the possibilities for physics beyond the standard model below the scale of quantum gravity.