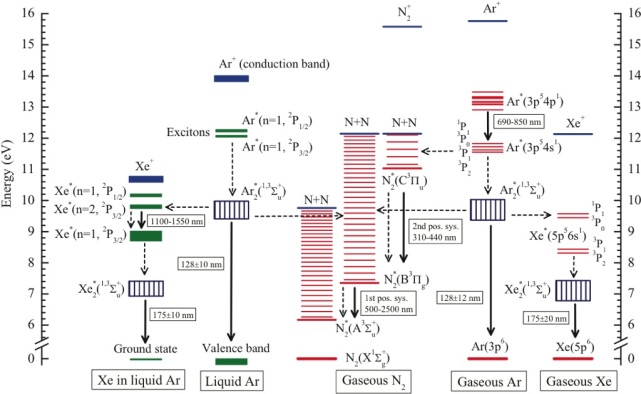 We present a comprehensive analysis of photon emission and atomic collision processes in two-phase argon doped with xenon and nitrogen. The dopants are aimed to convert the VUV emission of pure Ar to the UV emission of the Xe dopant in the liquid phase and to the near UV emission of the N2 dopant in the gas phase. Such a mixture is relevant to two-phase dark matter and low energy neutrino detectors, with enhanced photon collection efficiency for primary and secondary scintillation signals. Based on this analysis, we show that the recently proposed hypothesis of the enhancement of the excitation transfer from Ar to N2 species in the two-phase mode is either incorrect or needs assumption about a new extreme mechanism of excitation transfer coming into force at lower temperatures, in particular that of the resonant excitation transfer via ArN2 compound (van der Waals molecule). 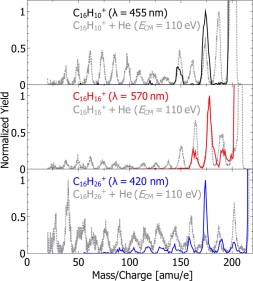 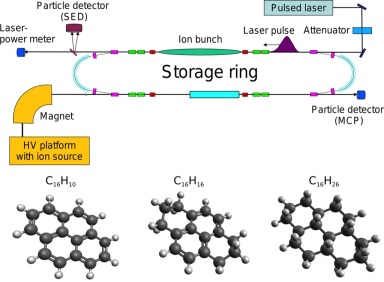 We have investigated the photo-stability of pristine and super-hydrogenated pyrene cations C$_{16}$H$_{10+m}^+, m = 0,6, \mathrm{\ or\ } 16$) by means of gas-phase action spectroscopy. Optical absorption spectra and photo-induced dissociation mass spectra are presented. By measuring the yield of mass-selected photo-fragment ions as a function of laser pulse intensity, the number of photons (and hence the energy) needed for fragmentation of the carbon backbone was determined. Backbone fragmentation of pristine pyrene ions (C$_{16}$H$_{10}^+$) requires absorption of three photons of energy just below 3 eV, whereas super-hydrogenated hexahydropyrene (C$_{16}$H$_{16}^+$) must absorb two such photons and fully hydrogenated hexadecahydropyrene (C$_{16}$H$_{26}^+$) only a single photon. These results are consistent with previously reported dissociation energies for these ions. Our experiments clearly demonstrate that the increased heat capacity from the additional hydrogen atoms does not compensate for the weakening of the carbon backbone when pyrene is hydrogenated. In photodissociation regions, super-hydrogenated Polycyclic Aromatic Hydrocarbons (PAHs) have been proposed to serve as catalysts for H$_2$-formation. Our results indicate that carbon backbone fragmentation may be a serious competitor to H$_2$-formation at least for small hydrogenated PAHs like pyrene. 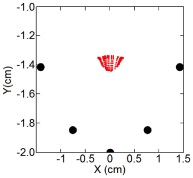 Trapping of microparticles, nanoparticles and aerosols is an issue of major interest for physics and chemistry. We present a setup intended for microparticle trapping in multipole linear Paul trap geometries, operating under Standard Ambient Temperature and Pressure (SATP) conditions. A 16-electrode linear trap geometry has been designed and tested, with an aim to confine a larger number of particles with respect to quadrupole traps and thus enhance the signal to noise ratio, as well as to study microparticle dynamical stability in electrodynamic fields. Experimental tests and numerical simulations suggest that multipole traps are very suited for high precision mass spectrometry measurements in case of different microparticle species or to identify the presence of certain aerosols and polluting agents in the atmosphere. Particle traps represent versatile tools for environment monitoring or for the study of many-body Coulomb systems and dusty plasmas. 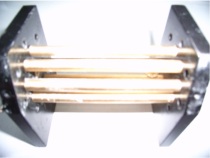 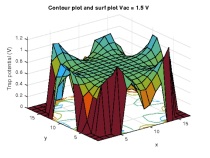 Trapping of microparticles and aerosols is of great interest for physics and chemistry. We report microparticle trapping in multipole linear Paul trap geometries, operating under Standard Ambient Temperature and Pressure (SATP) conditions. An 8-electrode and a 12-electrode linear trap geometries have been designed and tested with an aim to achieve trapping for larger number of particles and to study microparticle dynamical stability in electrodynamic fields. We report emergence of planar and volume ordered structures of the microparticles, depending on the a.c. trapping frequency and particle specific charge ratio. The electric potential within the trap was mapped using the electrolytic tank method. Particle dynamics was simulated using a stochastic Langevin equation. We emphasize extended regions of stable trapping with respect to quadrupole traps, as well as good agreement between experiment and numerical simulations.

A gas-phase optical spectrum of a large polycyclic aromatic hydrocarbon (PAH) cation – C78H26 +- in the 410-610 nm range is presented. This large all-benzenoid PAH should be large enough to be stable with respect to photodissociation in the harsh conditions prevailing in the interstellar medium (ISM). The spectrum is obtained via multi-photon dissociation (MPD) spectroscopy of cationic C78H26 stored in the Fourier Transform Ion Cyclotron Resonance (FT-ICR) cell using the radiation from a mid-band optical parametric oscillator (OPO) laser. The experimental spectrum shows two main absorption peaks at 431 nm and 516 nm, in good agreement with a theoretical spectrum computed via time-dependent density functional theory (TD-DFT). DFT calculations indicate that the equilibrium geometry, with the absolute minimum energy, is of lowered, nonplanar C2 symmetry instead of the more symmetric planar D2h symmetry that is usually the minimum for similar PAHs of smaller size. This kind of slightly broken symmetry could produce some of the fine structure observed in some diffuse interstellar bands (DIBs). It can also favor the folding of C78H26 + fragments and ultimately theformation of fullerenes. This study opens up the possibility to identify the most promising candidates for DIBs amongst large cationic PAHs. 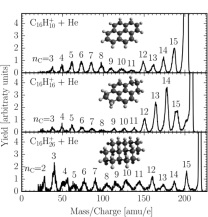 A recent study of soft X-ray absorption in native and hydrogenated coronene cations, C$_{24}$H$_{12+m}^+$ $m=0-7$, led to the conclusion that additional hydrogen atoms protect (interstellar) Polycyclic Aromatic Hydrocarbon (PAH) molecules from fragmentation [Reitsma et al., Phys. Rev. Lett. 113, 053002 (2014)]. The present experiment with collisions between fast (30-200 eV) He atoms and pyrene (C$_{16}$H$_{10+m}^+$, $m=0$, 6, and 16) and simulations without reference to the excitation method suggests the opposite. We find that the absolute carbon-backbone fragmentation cross section does not decrease but increases with the degree of hydrogenation for pyrene molecules.

There is accumulating evidence for the presence of complex molecules, including carbon-bearing and organic molecules, in the interstellar medium. Much of this evidence comes to us from studies of chemical composition, photo- and mass-spectroscopy in cometary, meteoritic and asteroid samples, indicating a need to better understand the surface chemistry of astrophysical objects. There is also considerable interest in the origins of life-forming and life-sustaining molecules on Earth. Here, we perform reactive molecular dynamics simulations to probe the formation of carbon-rich molecules and clusters on carbonaceous surfaces resembling dust grains and meteoroids. Our results show that large chains form on graphitic surfaces at low temperatures (100K – 500K) and smaller fullerene-like molecules form at higher temperatures (2000K – 3000K). The formation is faster on the surface than in the gas at low temperatures but slower at high temperatures as surface interactions prevent small clusters from coagulation. We find that for efficient formation of molecular complexity, mobility about the surface is important and helps to build larger carbon chains on the surface than in the gas phase at low temperatures. Finally, we show that the temperature of the surface strongly determines what kind of structures forms and that low turbulent environments are needed for efficient formation.

Comments: 13 pages, 14 figures; the manuscript has been submitted to MNRAS for publication