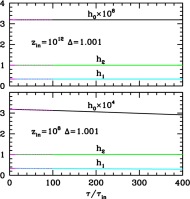 Strongly Coupled Dark Energy plus Warm dark matter (SCDEW) cosmologies are based on the finding of a conformally invariant (CI) attractor solution during the early radiative expansion, requiring then the stationary presence of $\sim 1\, \%$ of coupled-DM and DE, since inflationary reheating. In these models, coupled-DM fluctuations, even in the early radiative expansion, grow up to non-linearity, as shown in a previous associated paper. Such early non-linear stages are modelized here through the evolution of a top-hat density enhancement. As expected, its radius $R$ increases up to a maximum and then starts to decrease. Virial balance is reached when the coupled-DM density contrast is just 25-26 and DM density enhancement is $\cal O$$(10\, \%)$ of total density. We show that this is not an equilibrium configuration, for a fluctuation of coupled-DM as, afterwards, $R$ restarts to increase, until the fluctuation dissolves. We estimate the duration of the whole process, from horizon crossing to dissolution, and find $z_{horizon}/z_{erasing} \sim 3 \times 10^4$. Therefore, only fluctuations entering the horizon at $z \lesssim 10^9$-$10^{10}$ are able to accrete WDM with mass $\sim 100\, $eV -as soon as it becomes non-relativistic- so avoiding full disruption. Accordingly, SCDEW cosmologies, whose WDM has mass $\sim 100\, $eV, can preserve primeval fluctuations down to stellar mass scale.