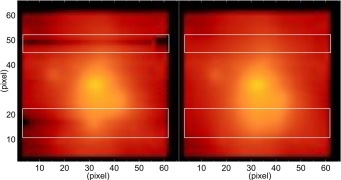 IC 630 is a nearby early-type galaxy with a mass of $6 \times 10^{10} M_{\odot}$ with an intense burst of recent (6 Myr) star formation. It shows strong nebular emission lines, with radio and X-ray emission, which classifies it as an AGN. With VLT-SINFONI and Gemini North-NIFS adaptive optics observations (plus supplementary ANU 2.3m WiFeS optical IFU observations), the excitation diagnostics of the nebular emission species show no sign of standard AGN engine excitation; the stellar velocity dispersion also indicate that a super-massive black hole (if one is present) is small ($M_{\bullet} = 2.25 \times 10^{5}~M_{\odot}$). The luminosity at all wavelengths is consistent with star formation at a rate of about $1-2 M_{\odot}$/yr. We measure gas outflows driven by star formation at a rate of $0.18 M_{\odot}$/yr in a face-on truncated cone geometry. We also observe a nuclear cluster or disk and other clusters. Photo-ionization from young, hot stars is the main excitation mechanism for [Fe II] and hydrogen, whereas shocks are responsible for the H$_2$ excitation. Our observations are broadly comparable with simulations where a Toomre-unstable, self-gravitating gas disk triggers a burst of star formation, peaking after about 30 Myr and possibly cycling with a period of about 200 Myr.