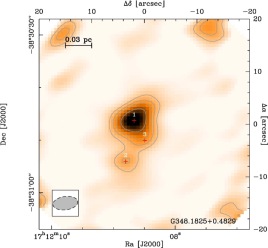 The early evolution of massive cluster progenitors is poorly understood. We investigate the fragmentation properties from 0.3 pc to 0.06 pc scales of a homogenous sample of infrared-quiet massive clumps within 4.5 kpc selected from the ATLASGAL survey. Using the ALMA 7m array we detect compact dust continuum emission towards all targets, and find that fragmentation, at these scales, is limited. The mass distribution of the fragments uncovers a large fraction of cores above 40 $M_\odot$, corresponding to massive dense cores (MDCs) with masses up to ~400 $M_\odot$. 77 % of the clumps contain at most 3 MDCs per clump, and we also reveal single clumps/MDCs. The most massive cores are formed within the more massive clumps, and a high concentration of mass on small scales reveals a high core formation efficiency. The mass of MDCs highly exceeds the local thermal Jeans-mass, and observational evidence is lacking for a sufficiently high level of turbulence or strong enough magnetic fields to keep the most massive MDCs in equilibrium. If already collapsing, the observed fragmentation properties with a high core formation efficiency are consistent with the collapse setting in at parsec scales.