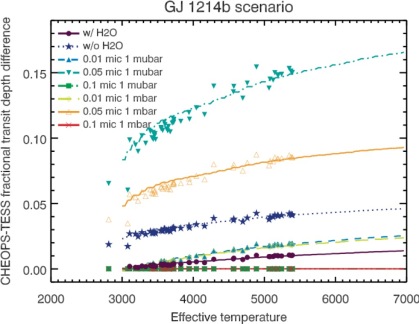 Space-based photometric surveys have discovered large numbers of planets transiting other stars, but these observe in a single band-pass and yield only the planet radius, orbital period, and transit duration. Information on the masses, compositions, and any atmospheres of these planets requires additional observations from the ground or space. The Transiting Exoplanet Survey Satellite (TESS) will yield thousands of planets around bright stars suitable for such follow-up. In the absence of spectroscopy or spectrophotometry from space, observations through the different pass-bands of multiple space telescopes provide some spectral information useful for identifying false positive signals, distinguishing between reflected light and thermal emission from hot Jupiters, and detecting Rayleigh scattering by planetary atmospheres. We calculated the expected difference in transit depths measured by the TESS and Characterizing Exoplanets Satellites (CHEOPS) missions, which will be more sensitive to redder and bluer optical wavelengths, respectively. The difference due to companion or background stars is small (<3% for main sequence companions) and likely to be negligible and undetectable. For only a few “hot” Jupiters, can combined photometry disambiguate between the reflected and thermal signals from planets. However, Rayleigh scattering by hazy atmospheres with particles sizes near 0.04 $\mu$m and at pressure altitudes above ~1 mbar can be detected for ~100 transiting planets, assuming every planet has such an atmosphere. Hazes with this characteristic particle size do not obscure observations at longer (near-infrared) wavelengths; CHEOPS follow-up of TESS-detected planets could thus identify candidates suitable for further study with the James Webb Space Telescope.