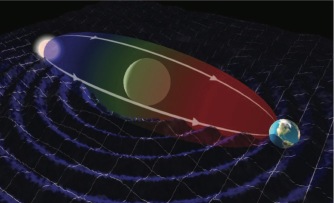 We consider the nonunitary quantum dynamics of neutral massless scalar particles used to model photons around a massive gravitational lens. The gravitational interaction between the lensing mass and asymptotically free particles is described by their second-quantized scattering wavefunctions. Remarkably, the zero-point spacetime fluctuations can induce significant decoherence of the scattered states with spontaneous emission of gravitons, thereby reducing the particles’ coherence as well as energy. This new effect suggests that, when photon polarizations are negligible, such quantum gravity phenomena could lead to measurable anomalous redshift of recently studied astrophysical lasers through a gravitational lens in the range of black holes and galaxy clusters.