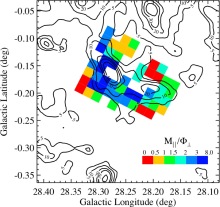 The importance of the magnetic (B) field in the formation of infrared dark clouds (IRDCs) and massive stars is an ongoing topic of investigation. We studied the plane-of-sky B field for one IRDC, G028.23-00.19, to understand the interaction between the field and the cloud. We used near-IR background starlight polarimetry to probe the B field and performed several observational tests to assess the field importance. The polarimetric data, taken with the Mimir instrument, consisted of H-band and K-band observations, totaling 17,160 stellar measurements. We traced the plane-of-sky B-field morphology with respect to the sky-projected cloud elongation. We also found the relationship between the estimated B-field strength and gas volume density, and we computed estimates of the normalized mass-to-magnetic flux ratio. The B-field orientation with respect to the cloud did not show a preferred alignment, but it did exhibit a large-scale pattern. The plane-of-sky B-field strengths ranged from 10 to 165 {\mu}G, and the B-field strength dependence on density followed a power law with an index consistent with 2/3. The mass-to-magnetic flux ratio also increased as a function of density. The relative orientations and relationship between the B field and density imply that the B field was not dynamically important in the formation of the IRDC. The increase in mass-to-flux ratio as a function of density, though, indicates a dynamically important B field. Therefore, it is unclear whether the B field influenced the formation of G28.23. However, it is likely that the presence of the IRDC changed the local B-field morphology.