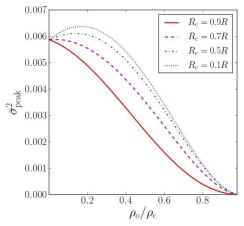 Rocky planets orbiting M-dwarf stars in the habitable zone tend to be driven to synchronous rotation by tidal dissipation, potentially causing difficulties for maintaining a habitable climate on the planet. However, the planet may be captured into asynchronous spin-orbit resonances if it has sufficiently large intrinsic triaxial deformation. We derive the analytic expression for the maximum triaxiality of a rocky planet, with and without a liquid envelope, as a function of the planet’s radius, density, rigidity and critical strain of fracture. The derived maximum triaxiality is consistent with the observed triaxialities for terrestrial planets in the solar system, and indicates that rocky planets in the habitable zone of M-dwarfs can in principle be in a state of asynchronous spin-orbit resonances.