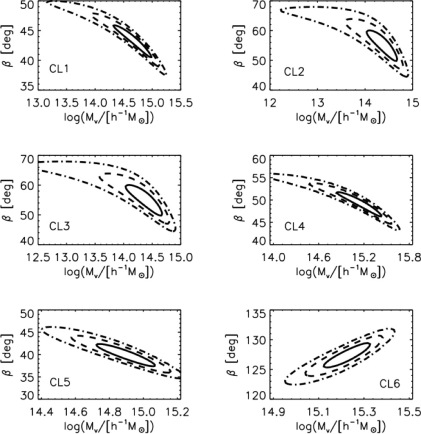 We present independent measurements of the masses of the galaxy clusters in the local universe by employing the Dynamical Mass Estimator (DME) originally developed by Falco et al in 2014. In the catalog of the galaxy groups/clusters constructed by Tempel et al. from the Sloan Digital Sky Survey Data Release 10, we search for those as the targets around which the neighbor galaxies constitute thin straight filamentary structures in the configuration space spanned by the redshifts and the projected distances. Out of the $29$ Sloan clusters that have $100$ or more member galaxies, a total of six targets are found to have filamentary structures in their bound zones. For each of the six targets, we construct the profile of the recession velocities of the filament galaxies, which depends on the cluster mass and the angle of the filament relative the line of the sight direction. Fitting the constructed profile to the universal formula with constant amplitude and slope, we statistically determine the dynamical mass of each cluster and compare it with the previous estimates made by a conventional method. The weak and strong points of the DME as well as its prospect for the measurements of the dynamical masses of the high-$z$ clusters are discussed.