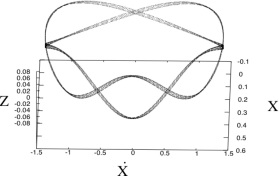 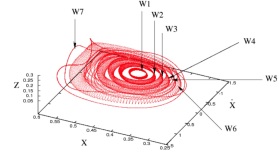 We study in detail the structure of phase space in the neighborhood of stable periodic orbits in a rotating 3D potential of galactic type. We have used the color and rotation method to investigate the properties of the invariant tori in the 4D spaces of section. We compare our results with those of previous works and we describe the morphology of the rotational, as well as of the tube tori in the 4D space. We find sticky chaotic orbits in the immediate neighborhood of sets of invariant tori surrounding 3D stable periodic orbits. Particularly useful for galactic dynamics is the behavior of chaotic orbits trapped for long time between 4D invariant tori. We find that they support during this time the same structure as the quasi-periodic orbits around the stable periodic orbits, contributing however to a local increase of the dispersion of velocities. Finally we find that the tube tori do not appear in the 3D projections of the spaces of section in the axisymmetric Hamiltonian we examined.

Comments: 26 pages, 34 figures, accepted for publication in the International Journal of Bifurcation and Chaos