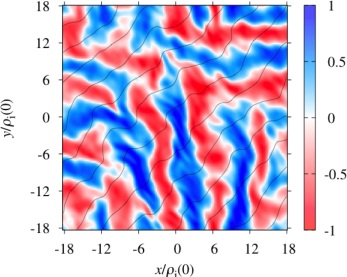 The nonlinear state of a high-beta collisionless plasma is investigated when an imposed linear shear amplifies or diminishes a uniform magnetic field, driving pressure anisotropies and hence firehose/mirror instabilities. The evolution of the resulting microscale turbulence is considered when the shear is switched off or reversed after one shear time (mimicking local behaviour of a macroscopic flow), so a new macroscale configuration is superimposed on the microscale state left behind by the previous one. There is a threshold value of plasma beta: when $\beta\ll\Omega/S$ (ion cyclotron frequency/shear rate), the emergence of firehose/mirror fluctuations driven unstable by shear and their disappearance when the shear is removed/reversed are quasi-instantaneous compared to the shear time, viz., the decay time of these fluctuations is $\sim\beta/\Omega \ll 1/S$ (this result follows from the free decay of the fluctuations being constrained by the same marginal-stability thresholds as their growth). In contrast, when $\beta\gtrsim\Omega/S$ (“ultra-high” beta), the old microscale state can only be removed on the shear timescale. In this regime, driven firehose fluctuations grow secularly to order-unity amplitudes, compensating for the decay of the mean field and so pinning pressure anisotropy at marginal stability with no appreciable scattering of particles—which is unlike what happens at moderate $\beta$. When the shear reverses, the shearing away of this firehose turbulence compensates for the increase in the mean field and thus prevents growth of the pressure anisotropy, stopping the system from going mirror-unstable. Therefore, at ultra-high beta, the system stays close to the firehose threshold, the mirror instability is largely suppressed, while the mean magnetic energy barely changes at all. Implications for plasma dynamo and thus the origin of cosmic magnetism are discussed.