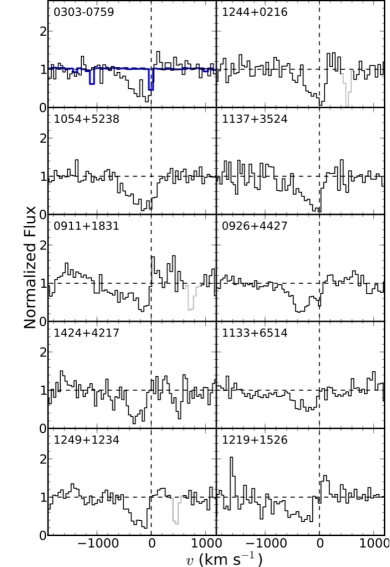 We report Hubble Space Telescope/Cosmic Origins Spectrograph observations of the Ly$\alpha$ emission and interstellar absorption lines in a sample of ten star-forming galaxies at z~0.2. Selected on the basis of high equivalent width optical emission lines, the sample, dubbed “Green Peas,” make some of the best analogs for young galaxies in an early Universe. We detect Ly$\alpha$ emission in all ten galaxies, and 9/10 show double-peaked line profiles suggestive of low H I column density. We measure Ly$\alpha$/H$\alpha$ flux ratios of 0.5-5.6, implying that 5% to 60% of Ly$\alpha$ photons escape the galaxies. These data confirm previous findings that low-ionization metal absorption (LIS) lines are weaker when Ly$\alpha$ escape fraction and equivalent width are higher. However, contrary to previously favored interpretations of this trend, increased Ly$\alpha$ output cannot be the result of a varying H I covering: the Lyman absorption lines (Ly$\beta$ and higher) show a covering fraction near unity for gas with N_{H I} >~ 10^{16} cm^{-2}. Moreover, we detect no correlation between Ly$\alpha$ escape and the outflow velocity of the LIS lines, suggesting that kinematic effects do not explain the range of Ly$\alpha$/H$\alpha$ flux ratios in these galaxies. In contrast, we detect a strong anti-correlation between the Ly$\alpha$ escape fraction and the velocity separation of the Ly$\alpha$ emission peaks, driven primarily by the velocity of the blue peak. As this velocity separation is sensitive to H I column density, we conclude that Ly$\alpha$ escape in these Green Peas is likely regulated by the H I column density rather than outflow velocity or H I covering fraction.