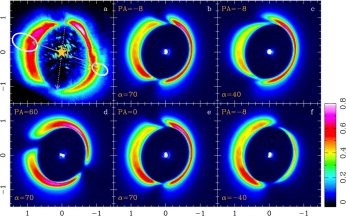 Detailed observations of gaps in protoplanetary disks have revealed structures that drive current research on circumstellar disks. One such feature is the two intensity nulls seen along the outer disk of the HD 142527 system, which are particularly well traced in polarized differential imaging. Here we propose that these are shadows cast by the inner disk. The inner and outer disk are thick, in terms of the unit-opacity surface in H-band, so that the shape and orientation of the shadows inform on the three-dimmensional structure of the system. Radiative transfer predictions on a parametric disk model allow us to conclude that the relative inclination between the inner and outer disks is 70+-5 deg. This finding taps the potential of high-contrast imaging of circumstellar disks, and bears consequences on the gas dynamics of gapped disks, as well as on the physical conditions in the shadowed regions.