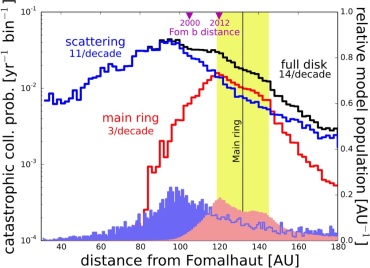 The planet candidate Fomalhaut b is bright in optical light but undetected in longer wavelengths, requiring a large, reflective dust cloud. The most recent observations find an extremely eccentric orbit (e ~ 0.8), indicating that Fomalhaut b cannot be the planet that is constraining the system’s eccentric debris ring. An irregular satellite swarm around a super-Earth has been proposed, however, explaining the well-constrained debris ring requires an additional planet on an orbit that crosses that of the putative super-Earth. This paper expands upon a second theory: Fomalhaut b is a transient dust cloud produced by a catastrophic collision between planetesimals in the disk. We perform collisional probability simulations of the Fomalhaut debris disk based on the structure of our Kuiper belt, finding that the catastrophic disruption rate of d ~ 100 km bodies in the high-eccentricity scattering component is several per decade. This model paints a picture of the Fomalhaut system as having recently (within ~10-100 Myr) experienced a dynamical instability within its planetary system, which scattered a massive number of planetesimals onto large, high eccentricity orbits similar to that of Fom b. If Fomalhaut b is indeed a dust cloud produced by such a collision, we should soon see another appear, while Fomalhaut b will expand until it is either resolved or becomes too faint to be seen.