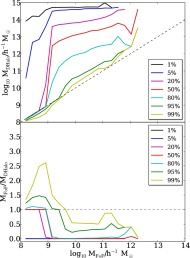 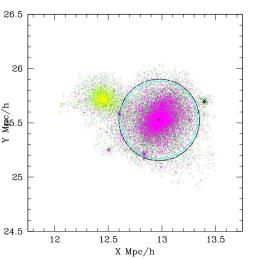 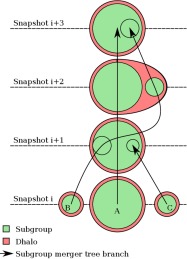 We present the Dhalo algorithm which analyses a series of cosmological N-body simulation snapshots to define a self-consistent set of dark matter haloes and merger trees describing their evolution. The advantage over the more common FoF haloes is that the Dhalo algorithm maintains as distinct haloes objects that can be prematurely linked into a single FoF group by tenuous bridges of particles or by the onset of the overlap of their outer diffuse haloes. It is important to understand the properties of the haloes defined by this new algorithm to ensure the assumptions made in galform are consistent with the simulation. We generate FoF and Dhalo catalogues for the Millennium Simulation II and compare their properties. About 90% of the Dhaloes have a bijective match with a FoF halo. The remaining 10% are typically secondary components of large FoF haloes. While a significant fraction FoF haloes are split into more than one Dhalo we find that there is little difference in their overall halo mass functions. Compared to FoF haloes the mass of Dhaloes correlates much more tightly with the virial mass. The correlation for non-bijective Dhaloes is less tight with a median value of MDhalo/M200 reduced by 23% compared to that of the bijective Dhaloes. This is due to the subfind substructure finder assigning less mass to subhaloes when they move into overdense environments. We investigate the distribution of concentrations of the FoF haloes, bijective and non-bijective Dhaloes. About 80% of all three sets of haloes satisfy standard criteria for selecting relaxed haloes. For these relaxed haloes we find that all the samples have very similar concentration-mass relations and at fixed mass the concentration distributions are well described by log-normal distributions.